How to Detect Air Leaks In Your Facility

How to Detect Air Leaks In Your Facility

It's that time of year again, at least for us up north. An easy way to minimize heating costs during the winter season is to conduct an air leak audit on your facilities. As much as 40% savings (https://www.airbarrier.org) can be seen by sealing up those elusive leaks. The question is how do you go about locating them? Well, there are a few different methods that will allow you to visualize the air currents from leaks. Air pressure manipulation, Infrared technology, smoke, and using your hands to feel around the facility envelope are all methods being used today for leak detection.

A blower door test involves mounting a sealed fan into any exterior door of a facililty. The exterior door must have direct access to the indoor space being tested for leaks. Obviously, the test wouldn't work so well if the blower door was placed in the outside doorframe of a vestibule, unless the vestibule is what you needed to test. Among blower doors that are calibrated, air pressure gauges determine how air tight the entire indoor space is. This test should be the first step in determining the presence of air leaks in a facility. This test can also be done with installed mechanical ventilation to create a positively or negatively pressurized interior. This test will not indentify where the leaks are just that they exist and how bad the leaks are cumulatively. 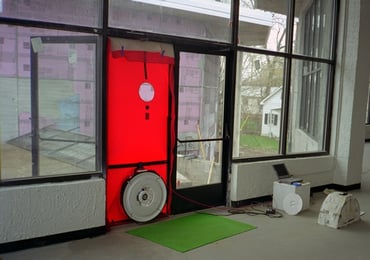 Thermal imaging allows you to see differences in temperature using infrared technology. The best time to use infrared to locate air leaks is during the hottest or coldest seasons. At these times, there is a big difference between the temperature of outdoor and indoor air making it easy to spot infiltrations through the facility envelope. The image below shows air infiltration around window, baseboards, and air vents. Thermal imaging can also be used to locate water leaks, wet insulation, and where insulation is insufficient. Infrared cameras cost anywhere from a few hundred to ten's of thousands of dollars. There are even some that are compatible with smartphones and tablets such as the SeekThermal CompactXR for $299 or the FLIR One for $249.99. 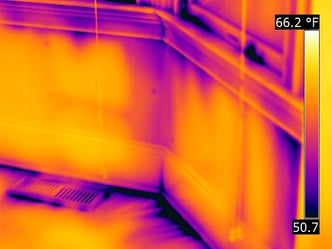 Laser readers have been around a while and are similar to thermography devices in that they detect changes in temperature. The difference is that infrared thermography overlays thermal readings over the surroundings where laser readers only report the temperature of what is being detected by the laser. If you know where problem areas could be, verifying air leaks with a laser tempererature reader may be all that you need. The video below reviews a simple ifrared temperature reader from Black & Decker. It's built for homeowners but it's simple to use and it's a cheap alternative to infrared thermography devices. You can even set reference points to compare surface temperature readings unlike most infrared laser devices. At $30-$40 it's pretty handy tool for commercial facilities as well.

Smoke allows you to visualize air flow. Most tests utilize a handheld smoke device such as a smoke pencil or smoke tubes to generate small amounts of concentrated smoke. If an air current is present from a leak, the smoke will be forced to move in the direction of the current. If smoke is being blown into the facility, there is air infiltration from outdoors or if it is being sucked out, there is air exfiltration from indoors. It is a good idea to pair this test with thermal testing to verify that temperature differences are caused by air leakage versus water damage or insuffiecient insulation. Smoke test kits run about $30-$60.

It may be a little rudamentary but it's effective. Feeling around for air leaks can be the easiest way to detect them. Drafts are common in most facilities and feeling around the envelope for cold breezes will tell you where some caulking is needed.

Here are some other helpful articles:

5 Reasons To Do Preventive Maintenance

Infographic - What Are The Types Of Maintenance?

What Is BIM and Why Is It Important?